In the age of sail, which lasted roughly from the sixteenth to the end of the nineteenth century, seafarers developed and used special routes across the seas and oceans which became known as sea lanes. Sea lanes were very important for trade and safe voyage of sail ships from one place to another. In age of sail, seagoing vessels used sails as means of propulsion which meant they moved by using the power of wind and ocean currents. The original sea lanes spanning across most of the world followed favourable winds and currents to help ships move faster and safer through the ocean. The discovery and knowledge of favourable winds and sea currents was crucial in making long voyages and overseas trade actually possible. 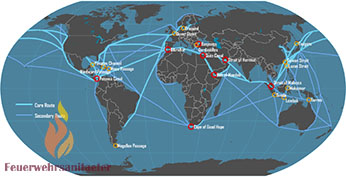 Originally, sea lanes were used by ships to sail successfully from west to east, and east to west. When a vessel was sailing from east to west it took advantage of the so called trade winds. When going the opposite way from west to east, a ship used the so called westerlies or western winds to do so quickly. Although there some variations, most of the original sea lanes used frequently in the age of sail were charted to follow these two winds. Ocean currents also played an important role in establishing and following a course during a voyage, but wind masses were the prevailing consideration for seafarers.

Sea lanes, although effective were by no means an ideal solution. There certain routes which had to be taken without the advantages of wind or current, such as the Cape Town to Rio de Janeiro one. Established sea lanes were not only known by commercial captains, but also by pirates so main shipping lanes used by commercial vessels frequently attracted pirates. In time of war, sea lanes also became major interest to opposing nations or their allies as supplies to a particular warring party could be cut off in order to prevail in a given battle or the war conflict as a whole. This became quite apparent and a widely used strategy in military conflicts, including major ones like the two world wars of the twentieth century. 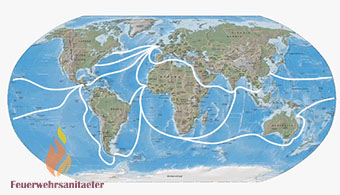 Even though modern commercial ships no longer use sails, they still use most of the main shipping lanes established during the age of sail. The ocean currents and winds still help a vessel sail quicker and safer to or from certain points around the world. This is still the main reason why commercial ships, powered by engines use these routes. Favourable currents can shorten a journey and save fuel. Established sea lanes however are not really meant for small sized vessels (vessels smaller than a certain size or tonnage) but are mostly reserved for large ships sailing across long distances. A smaller sized vessel would be in dangerous waters so to speak when navigating along a busy ship lane. Large commercial ships are powerful and less manoeuvrable, and in the instance of a collision a smaller vessels would stand no chance. Generally, captains of smaller ships tend to navigate (wherever possible) closer to shorelines.  One additional but major advantage provided by busy sea lanes is that they can help stranded sailors on a distressed ship be found and rescued by passing ships. Vessels in distress have been able to make their way closer or into shipping lanes in order to be found and rescued by passing ocean traffic. Shipping lanes also pose danger to scuba diving and other manned underwater operations so they must be either avoided, or underwater operations taking place in shipping lanes must be carefully planned and coordinated.